The MCC Foundation, a company limited by Guarantee and a not for profit entity, provides financial support to various community sport activities and programs. The MCC Foundation is passionate about providing all people access to sport, and the promotion and development of sport throughout communities.

Having invested in facilities and amenities for the use and enjoyment of members and the Club’s 13 sporting sections, in recent years the MCC Foundation partnered with Elwood College and Beaumaris Secondary College to develop grounds which benefit both students and local community groups outside of school hours.

The Foundation is proud to partner with a number of organisations whose values align with these core aims, providing each with significant support and ongoing opportunities.

Special Olympics Australia is part of a global sporting community providing people with an intellectual disability an opportunity to participate in sport.

Since February 2019, the MCC Foundation has been a major partner of Special Olympics Australia, with a focus on providing access and encouraging participation in sport.

The partnership has so far seen support of a number of Special Olympics Australia initiatives, including hosting Special Olympic athletes and administrators to celebrate International Day of People with a Disability at the MCG with a private tour and skills session on the hallowed turf.

The Bachar Houli Foundation, created by Richmond premiership star, Bachar Houli, aims to support social cohesion by fostering young Muslims, both male and female, with a sense of belonging through sport, employment opportunities and education programs.

Since joining the program as a founding partner in July 2019, the MCC Foundation has been able to support the foundation through access to the MCG for the Bachar Houli Academy, including the inaugural match of the Jolson-Houli Cup on the hallowed turf the day after the 2019 AFL Grand Final.

In a small, isolated Indigenous community 80km south-east of Alice Springs is the town of Santa Teresa.

The Santa Teresa Oval Project is a joint venture between Melbourne Football Club and Atyenhenge Atherre Aboriginal Corporation to re-grass the town’s clay red dirt oval., with the MCC Foundation became a major partner of the Project in August 2019.

The dust kicked up from the red dirt presents challenges for the local school, situated next to the oval, who would like to use it for their students’ sporting activities. Challenges include the dust becoming hazardous to those with breathing difficulties and anecdotally being linked to the increase in eye disease (Trachoma) cases.

In June 2021, the Oval was officially completed and launched, allowing now for the local Ltyentyies Apurte Football Club, AFL Auskick programs or athletics to be implemented on the community Oval. The MCC Foundation will continue to provide funding and support to the Oval until at least 2023, which will help the Oval's irrigation and ongoing maintenance.

The Sports Excellence Scholarship Fund (SESF) provides students with the opportunity to break down the barriers that have been placed in front of them, helping them achieve their dreams and build skills for life through the power of sport.

The SESF, founded in 2012, has supported over 900 students with over 50 scholarships per year through the Fund. The Fund serves to remove financial and emotional barriers, preventing young Victorian students from low socio-economic, Indigenous or rural and regional backgrounds to play represent their state.

As a major partner, the MCC Foundation will contribute financially to support bursaries for students who are chosen to represent their state or country but whose financial circumstances would otherwise prevent them from participating at these Championships across a two-year period in 2021 and 2022.

The Melbourne Indigenous Transition School (MITS) exists to empower Indigenous students from regional and remote communities to achieve their educational aspirations in Melbourne. Based on Wurundjeri Country since 2016, each year MITS supports 22 Year 7 students who spend one year learning in MITS’s classrooms inside the Richmond Football Club’s Korin Gamadji Institute, a high-quality and culturally safe learning environment.

The students live in MITS’s Year 7 Boarding House on Richmond Hill. At the end of Year 7, students transition into positions at MITS’s 12 Melbourne Partner Schools.

The MCC Foundation’s financial support funds the AFL registration fees for the MITS boarding students for the next four years, enabling the students to participate in organised club football within the local community.

With the MITS classroom in close proximity to the MCG precinct, students will be able to visit the Australian Sports Museum anytime they like as it allows students to learn about and be inspired by the story of Australian sport. 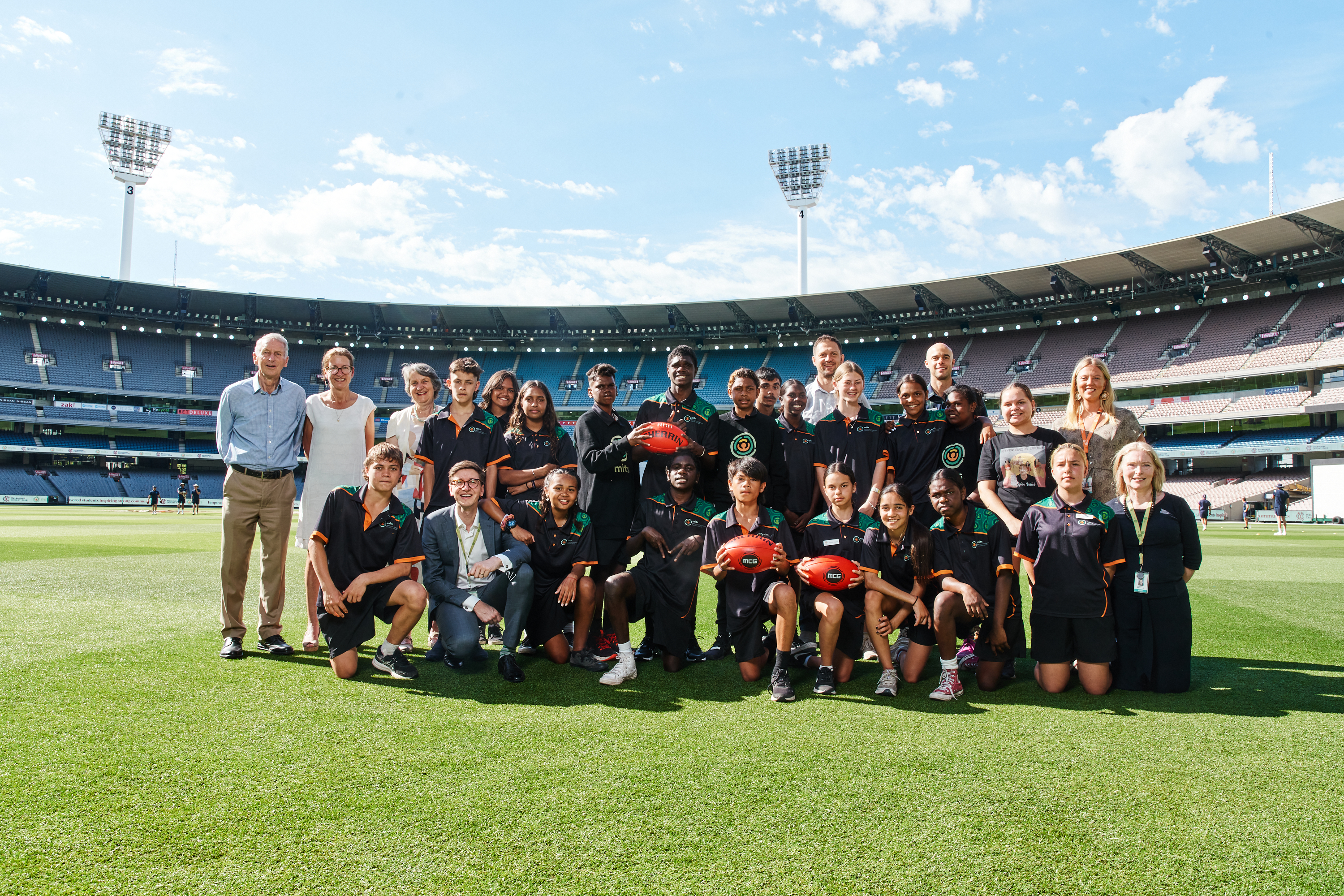 Other events and partnerships at the MCG

As ground managers of the MCG, the MCC has partnered with Melbourne City Mission since 2012 to host their flagship fundraising activity, Sleep at the ‘G. All funds raised from the annual event go to supporting the thousands of young Victorians facing homelessness on any given night.

The MCC also works with key stakeholders and their partners to provide support for initiatives such as Freeze MND’s The Big Freeze at the ‘G and the Breast Cancer Network Australia Field of Women.

In addition to these larger partnerships, the MCC endeavours to also support community groups and local organisations that align with the Club’s values through the donation of vouchers for visits to the Australian Sports Museum and MCG Tours.

To find out more or to submit a donation request, visit our Donation Requests page.